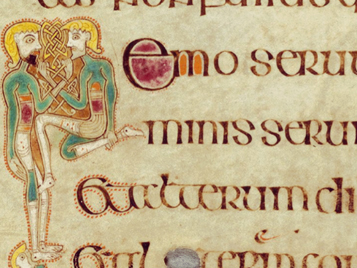 The Book of Kells is one of the most treasured gems from the early Celtic Christianity golden age of illuminated manuscripts. Across hundreds of pages made of vellum, the 4 Gospels are presented in beautiful insular type and an impressive amount of decorations, ornamentations, illustrations and mesmerizing Celtic knotworks.

Maybe because the early Celtic Church was a bit more lax than its continental counterparts, or maybe because this was produced by isolated, monastic clerics in poorly lit rooms for hours upon hours on end and they just needed to do SOMETHING for the craic, the Book is also home to some bizarre, inexplicable and downright bedazzling depictions:

Let’s begin with an eye-brow riser. At a glance, what exactly is happening here? What is it with the subtly homoerotic undertones? How are the physics involved in this pose supposed to work? Is it just me or are they wearing leotards? And most of all, what’s the deal with the mutual-beard pulling!?

This brotherly “helping hand” is quite a common theme all throughout the book, so one has to wonder exactly what went on during those lonely monastery nights back in the day.

When I first saw this tiny little fellow, I assumed it depicted a warrior with a spear and a shield, and the little fact that his penis shows went right by my head. It wasn’t until I was reading “How the Irish Saved Civilization” by Thomas Cahill that I came across this alternative possibility:

“This decorative page lists the genealogy of Jesus as found in Luke’s Gospel. The scribe has left us a jaunty picture of himself – with palette and brush (and, as if to illustrate the theme of generation, his own modest erection) – in the bottom right corner.”

So there you have it. There’s a dick pic hidden among the most perfectly illuminated manuscript of early Celtic Christianity and nothing is sacred anymore ٩(●ᴗ●)۶

Apart from the occasional monk being eaten alive by a dragon (and the one page which guest-stars a depiction of the one and only SATAN; which I’ll be illustrating next), the Book of Kells is surprisingly devoid of demonic, damning representations. An exception can be found when one examines folio number 290, verse-side.

This page depicts the symbols of the Four Evangelists: The Angel for St. Matthew, the Lion for St. Mark, the Eagle for St. John. Why, oh why has the scribe chosen to represent good old St. Luke, whose symbol is the Calf, as this Abominable Bovine From Hell? None of the other 4 creatures look nearly as terrifying, menacing or possessed by an unholy force of evil as this one does. Even the Angel at the top seems to be looking down at this horrible beast as if something has gone terribly wrong.

In all fairness to the original artist, this is apparently an unfinished page, so maybe he was going for a theme and planned to turn the other 3 into heralds of unspeakable horror as well. Or maybe he was vegan and this was the way he found to make his statement in those days of no internet and unreliable messengers: “Not your mamma, not your milk”.

4) The Prince of Darkness

Because the universe will always tend to balance itself, the Book that has the power to turn Darkness into Light had to have some point of extreme Darkness lurking somewhere in its pages. And lo and behold, none other than Lucifer himself shows up for the task.

We find his mysterious representation (unlike any other figure in the whole book) on folio 202v, a page that depicts one of Christ’s Temptations. In this specific case, the time where Old Nick tried to talk J-Sooz into jumping down from the temple’s roof in Jerusalem to prove his angels would save him.

The page is overflowing with religious symbols, metaphors and meaning, but the BEST thing about this particular page, besides this very important visitation from Hell, is the fact that right in the area of Satan’s neck and upper body, the image has been disfigured by around 20 small STAB marks.

According to Bernard Meehan from Trinity College: “This controlled attack, not visible to the naked eye at first glance, seems to have been undertaken at a time when the book was bound, with the knife going through the vellum to previous leaves. The date of this intervention in the life of the Book of Kells is impossible to determine with accuracy, though it may be supposed to have occurred in the middle ages.”

Think about that: Sometime around the time the book was made, some fearsome individual made it his objective to take a knife, get close enough to the well-guarded priceless manuscript without arising suspicion, and stab this figure of damnation in an attempt to invoke (or pacify?) who knows what mystical forces.

Or maybe it was just the lads from the village messing with the monks after a night of booze and merryment.

But folio 202v still holds one more unexpected being lurking within.

“As previously mentioned, the Manuscript is in a good many of its decorative portions unfinished. It is now certain that some at least of the unfinished ornaments have been continued by an inferior hand”
‘The Book of Kells’ by Edward Sullivan, [1920]

Eddie said it, no me. But boy was he right about this one. This solemn figure is supposed to represent Christ as a Judge in the Last Judgement scene, and yes, I’m very well aware that besmirching the figure of our Savior as a mean irish Ol’ Biddy is not necessarily earning me any spots in Heaven. But I can’t help agreeing with Mr. Sullivan. I mean I can’t be the only one that sees an old, God-fearing woman within that rectangle, right?

The fact that less than expert handwork can be spotted throughout the book also strengthens the theory that it might be from a much earlier time (and took way longer to make) than one would expect. As an artist, I find such lower-quality illustrations quite endearing.

I like to imagine an innocent, young scribe apprentice probably called Brother Jimmy that after much persuading his Master gets a spot on the Book but ends up screwing it up and winter was coming so no time to fix it let’s print it people.

Let me present to you a quaint example of the randomness that makes the Book of Kells such fascinating yet intimidating fun.

This slighty disturbing (and disturbed) frankensteinian abomination pokes from behind a nicely executed but generally simply decorated “M” in the first pages of the book. His feet also show up behind and below the letter, giving him also an unusual and quite not at all natural height. I like to believe that like his Timburtonian counterpart, he was a failed experiment left behind and uncomplete by some maniac genius.

His intense gaze seems to look deep into your soul, silently forewarning it of the trippy adventure that awaits you shall you decide to journey through the Book’s pages.

It might have been all my teenage years devouring X-Men comics, but as soon as I saw that little figure among the text I thought “HE’S WEARING AN X-MEN UNIFORM FROM THE 90’s!“. Our mutant superhero was not dealt the best of “hands” (get it?) when he got his powers, these being basically having an extra set of arms and hands instead of legs and feet. Maybe they also include rocking that sweet Mullet hairstyle so appropriate for his time?

It is yet another stroke in the painting that is the strange obsession the monks who worked on the Book had with men wearing their extremities in terribly unnatural positions.

I could sit here and type away about the inexplicable pose or why is it biting its own paw or what the hell is happening with its tri-partite tail end-bits, but this is becoming repetitive.

This one is the epic, fascinating scene of a good monk facing up to his darkest, most horrifying inner demons. I like to call him Brother Chill-Kenny, because just look how insouciant he remains in the face of pure and utter Darkness!

We find this paragon of nonchalant equanimity sitting atop the curl of a P in the folio 292r, the Opening of St. John’s gospel. Apparently, he is supposed to be a Christian individual that is able to ward off the forces of Evil by drinking Eucharistic wine; demonstrating the very Irish notion that most of Life’s strife and hardships can be easily overcome by the magic of holy intoxication.

I am absolutely in love with the idea of a budding artist being given a chance to shine and screwing it up completely. There’s such a humanizing feel to that. This is what happened, I believe, when old Seannie was brought to life by some less-than mature artist’s hand.

He makes his clearly uncalled-for appearance in the opening words of St. Matthew’s Gospel (also known as folio 29), one the most elaborate and beautifully performed pages, making his existence and placing even more puzzling.

According to experts, it was indeed probably added at a later time. I can totally see some cocky new scribe in the Monastery looking at the page, noticing the blank space on the left and thinking “Yeah I know how I can improve this page. Wait ’till Abbot sees it!”.

The result was Seannie Hoof-Toes, a missionary monk who was never the same after accepting some suspicious-looking mushrooms from the Druids he was trying to convert. Seannie was cursed to roam the Land forever in an eternal landing phase, trying to find new converts and failing time and time again by reason of his unnatural demeanor. Making do with a pair of unsightly hooves for feet, the horrors he witnessed that night forever carved in his wide-open eyeballs, and the kinda-cool but not really impressive power of 5 cms high levitation.

Note: The kind people over at Trinity College Library have made the whole book available to see on their website. Go take a look if you’re interested!